While we declared our national independence in 1776 and drafted our new, and abiding, Constitution just a decade later, the founding of the United States of America should perhaps not be taken as the beginning point of democracy in America. Before the Founding Fathers there were the Pilgrim Fathers. That great analyst of American democracy Alexis de Tocqueville (1805–1859) argued in Democracy in America that the nation’s point of departure was really to be found in the ideas and practices of the “pious adventurers” who came to the wilderness so that they might “pray to God in freedom” and, in their own words, “build a city upon a hill” as a beacon to the rest of the world. According to Tocqueville, “Puritanism was not only a religious doctrine; it also blended at several points with the most absolute democratic and republican theories.” Evidence of the mixture of high religious purpose with political notions that led to the flourishing of independent township government (especially in New England) can be seen in the Mayflower Compact. Signed aboard ship on November 11, 1620, it became the first governing document of the colonists who landed at Plymouth Rock.

How do the Pilgrims understand their community? Is “covenant” or “compact” just a synonym for “social contract” and government based on consent? Or does the language of covenant indicate something distinctive about the foundations or purposes of their political union? Tocqueville claimed that the American point of departure was “a product of two perfectly distinct elements that elsewhere have often made war with each other, but which, in America, they have succeeded in incorporating somehow into one another and combining marvelously . . . the spirit of religion and the spirit of freedom.” Are these two spirits still present—still compatible, still mutually supportive—in America today? Does it matter whether they are still present and still harmonious?

In the name of God, Amen. We whose names are underwritten, the loyal subjects of our dread Sovereign Lord King James, by the Grace of God, of Great Britain, France and Ireland King, Defender of the Faith, etc.

Having undertaken, for the Glory of God and advancement of the Christian Faith and Honour of our King and Country, a Voyage to plant the First Colony in the Northern Parts of Virginia, do by these presents solemnly and mutually in the presence of God and one of another, Covenant and Combine our selves together into a Civil Body Politic, for our better ordering and preservation and furtherance of the ends aforesaid; and by virtue hereof to enact, constitute, and frame such just and equal Laws, Ordinances, Acts, Constitutions and Offices, from time to time, as shall be thought most meet and convenient for the general good of the Colony, unto which we promise all due submission and obedience.

In witness whereof we have hereunder subscribed our names at Cape Cod, the 11th of November, in the year of the reign of our Sovereign Lord King James, of England, France, and Ireland the eighteenth, and of Scotland the fifty-fourth. Anno Domini 1620. 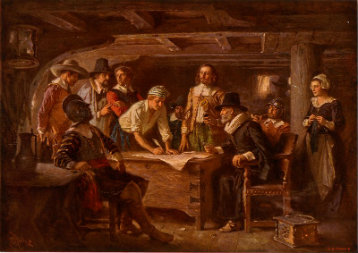