The Pledge of Allegiance at the Hanoi Hilton

In response to the US Supreme Court decisions in the flag-burning cases (Texas v. Johnson, 1989, United States v. Eichman, 1990), Congress has considered amending the Constitution to prohibit physical desecration of the American flag. From 1995 to 2006, the proposed amendment passed the House of Representatives, but failed to obtain the necessary supermajority in the Senate, failing in 2006 by one vote. In the Senate debate of 2000, speaking in support of the Flag Protection Amendment, Senator John McCain (b. 1936) related this moving story about a fellow Vietnam prisoner of war who was severely beaten by guards for fashioning a makeshift American flag. (As a US Navy aviator in the Vietnam War, McCain had been shot down and seriously injured during a bombing mission over Hanoi in 1967. He remained a prisoner of war, experiencing torture, until 1973, having refused an out-of-sequence early repatriation.)

How do you understand Mike Christian’s sewing of the flag and the meaning it held for his cellmates? Explain why the North Vietnamese punished him. How are you moved by this story? Does this anecdote make a good “argument” for legislation—for a constitutional amendment—prohibiting the physical desecration of the American flag? Why or why not?

Mr. President, I rise today in support of Senate Joint Resolution 14. It is with great honor and reverence that I speak in support of this resolution, a bipartisan constitutional amendment to permit Congress to enact legislation prohibiting the physical desecration of the American flag.

Let me explain my support by recalling the sacrifice for flag and country of a prisoner of war I had the honor of serving with.

I spent 5 ½ years at the Hanoi Hilton. In the early years of our imprisonment, the North Vietnamese kept us in solitary confinement of two or three to a cell. In 1971, the North Vietnamese moved us from these conditions of isolation into large rooms with as many as 30 to 40 men to a room. This was, as you can imagine, a wonderful change. And it was a direct result of the efforts of millions of Americans, led by people like Ross Perot, and Nancy and Ronald Reagan, on behalf of a few hundred POW’s, 10,000 miles from home.

One of the men who moved into my cell was Mike Christian. Mike came from Selma, Alabama. He didn’t wear a pair of shoes until he was 13 years old. At 17, he enlisted in the U.S. Navy. He later earned a commission. He became a Naval aviator, and was shot down and captured in 1967. Mike had a keen and deep appreciation for the opportunities this country—and our military—provide for people who want to work and want to succeed.

The uniforms we wore in prison consisted of a blue short-sleeved shirt, trousers that looked like pajamas, and rubber sandals that were made out of automobile tires.

As part of the change in treatment, the Vietnamese allowed some prisoners to receive packages from home. In some of these packages were handkerchiefs, scarves and other items of clothing. Mike got himself a piece of white cloth and a piece of red cloth and fashioned himself a bamboo needle. Over a period of a couple of months, he sewed the American flag on the inside of his shirt.

Every afternoon, before we had a bowl of soup, we would hang Mike’s shirt on the wall of our cell, and say the Pledge of Allegiance. I know that saying the Pledge of Allegiance may not seem the most important or meaningful part of our day now. But I can assure you that—for those men in that stark prison cell—it was indeed the most important and meaningful event of our day.

Then they opened the door of the cell and threw him back inside. He was not in good shape. We tried to comfort and take care of him as well as we could. The cell in which we lived had a concrete slab in the middle on which we slept. Four naked light bulbs hung in each corner of the room.

After things quieted down, I went to lie down to go to sleep. As I did, I happened to look in the corner of the room. Sitting there beneath that dim light bulb, with a piece of white cloth, a piece of red cloth, another shirt and his bamboo needle, was my friend Mike Christian, sitting there, with his eyes almost shut from his beating, making another American flag. He was not making that flag because it made Mike Christian feel better. He was making that flag because he knew how important it was for us to be able to pledge our allegiance to our flag and our country. 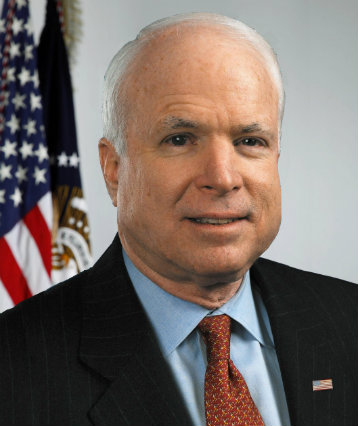