The Origins and Traditions of Thanksgiving

Thanksgiving is a venerable and much beloved American holiday. In colonial times it was primarily a harvest holiday, in which the colonists offered thanks for a good harvest, sometimes by feasting, sometimes by fasting. A holiday was already celebrated in the Spanish colony of Florida in the 16th century, and in the British colonies of Virginia and Massachusetts in the 17th century, most famously in 1621, when the Pilgrims at Plymouth, Massachusetts celebrated their first successful harvest in the company of some of the Native American tribesmen. Thanksgiving became a regularly celebrated national holiday only during the Civil War, when Abraham Lincoln proclaimed a day of national Thanksgiving in 1863.  The holiday became fixed to the fourth Thursday in November by an act of the United States Congress in 1941.

In May of 1541, Spanish explorers under Francisco Vásquez de Coronado camped on the rim of Palo Duro Canyon (near modern-day Amarillo, Texas) and joined together in a celebration of thanksgiving. Nearly a quarter-century later, French Huguenot colonists at Fort Caroline, Florida set aside a day for solemn praise and thanksgiving in June 1564. In the late summer of 1607, English settlers in Maine united with Abnaki Indians for a harvest feast. Three years later, English colonists in Jamestown, Virginia held a jubilant day of thanksgiving when fresh supply ships arrived, providing the surviving colonists with much-needed food after a severe winter and disastrous drought. In 1619, pursuant to their charter, English settlers at Berkeley Hundred, Virginia decreed that the day of their arrival “shall be yearly and perpetually kept holy as a day of thanksgiving to Almighty God.”1

Of course, the most famous early American thanksgiving celebration occurred at Plymouth Plantation in the fall of 1621, when about fifty Pilgrims joined with nearly a hundred Pokanoket Indians—including the tribe’s chief, or Massasoit, Ousamequin—for a three-day-long harvest festival.2 Desiring to separate from the Church of England and set up their own government, the Pilgrims had left England aboard the Mayflower the previous August. After two months of weathering choppy seas, they reached the New World, landing at Cape Cod, Massachusetts. While still aboard ship, on November 11, the Pilgrims signed the Mayflower Compact, in which they “Covenant[ed] and Combine[d] [them] selves together into a Civil Body Politic, for [their] better ordering and preservation.”

On December 18, after sending out parties to explore the area, the Mayflower docked at Plymouth Rock on the western side of Cape Cod Bay, and the new colonists settled in for a harsh winter. They spent their first few months in the New World aboard the ship. More than half died, victims of poor nutrition, inadequate housing, and disease.

Shortly after moving to land in March 1621, the Pilgrims met an English-speaking Patuxet Indian named Tisquantum (“Squanto”) who served as a guide and translator for the Englishmen and the local Pokanoket tribe. The Native Americans helped the colonists adapt to the New World, teaching them what to farm and how to hunt local animals and providing the colonists with needed supplies when their stores were low. In the fall, to celebrate their successful harvest, the Pilgrims hosted the Native Americans for a feast of lobsters, clams, vegetables, and, famously, a “great store of wild Turkies.” Writing in Mourt’s Relation, his firsthand account of the colony at Plymouth Rock, Edward Winslow describes the festivities:

Our harvest being gotten in, our governor sent four men on fowling, that so we might after a special manner rejoice together after we had gathered the fruits of our labor. They four in one day killed as much fowl as, with a little help beside, served the company almost a week. At which time, amongst other recreations, we exercised our arms, many of the Indians coming amongst us, and among the rest their greatest king Massasoit, with some ninety men, whom for three days we entertained and feasted, and they went out and killed five deer, which we brought to the plantation and bestowed on our governor, and upon the captain and others. And although it be not always so plentiful as it was at this time with us, yet by the goodness of God, we are so far from want that we often wish you partakers of our plenty.

Although the colonists set aside other days for thanksgiving, these were much more somber affairs than the harvest festival we now think of as America’s “first Thanksgiving.” In November 1777, the First National Proclamation of Thanksgiving was issued by the Continental Congress following the Colonial victories over British General John Burgoyne in the Battles of Saratoga. In the Proclamation, Congress “recommended to the legislative or executive Powers of these United States to set apart Thursday, the eighteenth Day of December next, for Solemn Thanksgiving and Praise.” Near the end of the Revolutionary War—after the British House of Commons had voted to end the war in America, but before the formal signing of the Treaty of Paris—the Congress proclaimed another “day of solemn Thanksgiving to God for all his mercies.”

The first Thanksgiving Day celebrated under the new Constitution, took place on November 26, 1789, the first year of George Washington’s presidency. At the encouragement of the House of Representatives, President Washington proclaimed a day to be devoted to “public thanksgiving and prayer,” and sent money to supply debtors in prison with provisions, thus beginning the Thanksgiving Day tradition of charity. Washington’s proclamation, however, did not result in a new holiday: John Adams, Washington’s successor, recommended a “National Day of Humiliation, Fasting, and Prayer,” rather than a thanksgiving day, while Thomas Jefferson opposed the proclamation of both thanksgiving and fast days as counter to the separation of church and state.

Although many states, particularly in New England, continued to have annual observances of thanksgiving, there wasn’t another national Thanksgiving Day until Abraham Lincoln proclaimed one in 1863 to celebrate the Union victories at Gettysburg and Vicksburg—an act we owe, in part, to the efforts of Sarah Josepha Buell Hale. The editor of the popular magazine Godey’s Lady’s Book and famous author of “Mary Had a Little Lamb,” Hale had devoted an entire chapter to the importance of Thanksgiving traditions in her 1827 novel, Northwood. She campaigned to make the day a national holiday, year after year sending letters to governors, congressmen, senators, and to the White House, addressing notes to at least six different presidents.

By 1855, 14 states recognized the fourth Thursday in November as Thanksgiving Day, with two others celebrating the holiday on the third Thursday. Territories such as California and Oregon even proclaimed the holiday before being recognized as states. In September 1863, Hale published an editorial once again urging President Lincoln to proclaim a national Thanksgiving Day. On October 3—the same date on which Washington had offered his Thanksgiving Proclamation—Lincoln declared that Thanksgiving Day would be observed on the last Thursday in November. Writing in the midst of the Civil War, Lincoln urged Americans to remember the “gracious gifts of the Most High God, who, while dealing with us in anger for our sins, hath nevertheless remembered mercy” and to “fervently implore the imposition of the Almighty hand to heal the wounds of the nation and to restore it.”

After the Civil War

Following the Civil War, the once solemn day of Thanksgiving became a celebratory holiday to rival the Pilgrims’ harvest festival in Plymouth. By the early 20th century, the religious nature of the holiday had melded with the civic, and it acquired a new purpose, as an occasion to incorporate newcomers into American customs. Festivals in honor of the Pilgrims became popular, as did the ubiquitous grade-school Pilgrims-and-Indians pageants. Costumed parades were held in different cities, and in 1921 Gimbels Department Store sponsored a Thanksgiving Day parade in Philadelphia. In 1938, Macy’s did the same for New York, bringing the famous Uncle Sam balloon to the streets of Manhattan. Football soon became its own Thanksgiving Day tradition, with many college teams choosing to play their big games on the holiday.

In 1939, President Franklin D. Roosevelt joined the continuous line of presidents since Lincoln to offer a Thanksgiving Day Proclamation. He differed with his predecessors, however, by declaring that the holiday would be celebrated on the second-to-last Thursday of November, since that year the last Thursday was on November 30 and retailers were concerned that the late date would not leave enough time for Christmas shopping. Roosevelt’s change was met with a storm of protest, and sixteen states refused to accept the president’s proclamation and continued to celebrate Thanksgiving on the last Thursday of the month. To settle the matter, Congress established the Federal Thanksgiving Day holiday. On October 6, 1941, the House of Representatives passed a motion declaring “the last Thursday in November a legal holiday.” The Senate then passed an amendment “making the fourth Thursday in November a legal holiday” (to avoid the trouble caused by the occasional fifth Thursday in November), and President Roosevelt signed the resolution on December 26, 1941.

Today, Thanksgiving is perhaps our most beloved national holiday, yet it is celebrated quietly, privately, with festive meals prepared at home and shared with family and friends. The busy streets of the city are quiet, the concerns with getting and spending are set aside, and the entire nation, household by household in the year’s colorful autumn of the year, establishes and perpetuates its own traditions of celebrating the bounties of nature and of expressing gratitude. The remarkable Thanksgiving mood and activity are highlighted by the contrast with the day after Thanksgiving, known as “Black Friday,” when the shopping season for Christmas opens with a vengeance at midnight.

There is another tradition associated with the holiday: Every year since 1863, every president since Abraham Lincoln has issued a Thanksgiving Day Proclamation, in which—in addition to officially announcing the day—he offers his own ideas about the holiday. Perusing these proclamations is an interesting and illuminating way of discovering the evolving idea of the meaning of the holiday and the things for which Americans—or at least their leaders—believe we should be grateful.

1 The Indian Massacre of 1622, however, forced the colonists to take refuge in Jamestown, and the settlement at Berkeley Hundred—along with its thanksgiving tradition—was abandoned for some time. Catherine Clinton, “A History of the Thanksgiving Holiday,” Gilder Lehrman Institute. Return to text.
2 As different accounts refer to the Indians either as Pokanoket or as Wampanoag, it is helpful to point out that the former were a smaller tribe within the Wampanoag Nation. Return to text. Return to The Meaning of Thanksgiving Day. 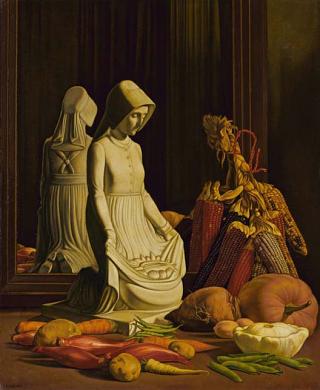