The Origins and Traditions of Flag Day

On June 14, 1777, while finalizing the draft of the Articles of Confederation, the Second Continental Congress passed a resolution “That the flag of the thirteen United States be thirteen stripes, alternate red and white: that the union be thirteen stars, whiten a blue field, representing a new constellation.”

One hundred and 39 years and 24 iterations of the flag later, in 1916, President Woodrow Wilson issued a presidential proclamation that officially established June 14 as Flag Day to commemorate the 1777 resolution:

It has . . . seemed to me fitting that I should call your attention to the approach of the anniversary of the day upon which the flag of the United States was adopted by the Congress . . . and to suggest to you that it should this year and in the years to come be given special significance as a day of renewal and reminder, a day upon which we should direct our minds with a special desire of renewal to thoughts of the ideals and principles of which we have sought to make our great Government the embodiment.

Although it took 139 years from the flag’s creation for a national Flag Day to be proclaimed, many organizations and cities celebrated the day long before. Such celebrations rose in popularity shortly after the Civil War, and by the 1890s were common in cities across America. Indeed, it is in part due to their popularity that it is so difficult to single out one celebration as the first instance of Flag Day.

One of the earliest claims, though, comes from a celebration held in Hartford, Connecticut in the summer of 1861. Charles Dudley Warner, the editor of the Hartford Evening Press, urged the city’s citizens to celebrate “a day of feasting and jollity. And let the great feature of it be a general display of American flags.” The flag, he continued, “is our dearest symbol of nationality . . . to keep it full high advanced is our highest pride; to strike at it is to arouse all the pride of the nation to defend it.”

Schools across the nation also began to hold Flag Day programs in the 1860s in order to introduce immigrant children to American symbols, a practice that spread to their own communities.

On June 14, 1877, Boston held a celebration in honor of the 100th anniversary of Congress’s first flag resolution. At the celebration, held at the Old South Meeting House—where the Boston Tea Party had begun—Boston Mayor Frederick O. Prince presided over an unveiling of the original Star-Spangled Banner Francis Scott Key had seen flying over Fort McHenry; citizens then sang the words to Key’s ode to the flag.

A few years later, a young school teacher in Waubeka, Wisconsin by the name of Bernard J. Cigrand began advocating for a nationwide celebration of the flag. In 1885, when he was 19 years old, Cigrand asked his students at the one-room schoolhouse he taught at to write essays on what the American flag meant to them. The following year, Cigrand himself took to the papers, writing in a Chicago newspaper about the need for Flag Day. Though he soon left teaching in order to become a dentist, Cigrand wrote many more articles and gave hundreds of speeches advocating for a holiday to honor the flag.

One of the most widely recognized claims is by Professor George Bolch, the principal of a free kindergarten for poor children in New York City. On June 14, 1889, Bolch organized ceremonies at his school to mark the anniversary of the 1777 resolution. Purportedly, this event drew attention from the New York Department of Education, prompting the state legislature to pass a law that public schools should hold similar celebrations for Lincoln’s birthday, Washington’s birthday, Memorial Day, and Flag Day.

Yet another tale of Flag Day’s origins comes from Pennsylvania, where Elizabeth Duane Gillespie, president of the Society of Colonial Dames and direct descendant of Benjamin Franklin, tried to get the city of Philadelphia to name June 14 as Flag Day in 1893. Eventually, in 1937, Pennsylvania did establish Flag Day as a legal holiday. Today, it remains the only state to officially celebrate Flag Day as a state holiday.

Regardless of where the tradition began, by the mid-1890s Flag Day had become a popular event. Governors issued proclamations supporting the celebration of Flag Day in their jurisdictions. Veterans groups and schools were among the first to embrace the holiday as an opportunity to promote patriotism.

Flag Day remained popular well into the 20th century, especially during the national crises of World War I and II and the Cold War. In 1966, Congress even called upon the president to issue a proclamation declaring the week of Flag Day to be National Flag Week.

In 2012, President Barack Obama carried on this tradition in his Flag Day and National Flag Week proclamation, emphasizing the importance of the flag as an American emblem:

As we reflect on our heritage, let us remember that our destiny is stitched together like those 50 stars and 13 stripes. In red, white, and blue, we see the spirit of a Nation, the resilience of our Union, and the promise of a future forged in common purpose and dedication to the principles that have always kept America strong. 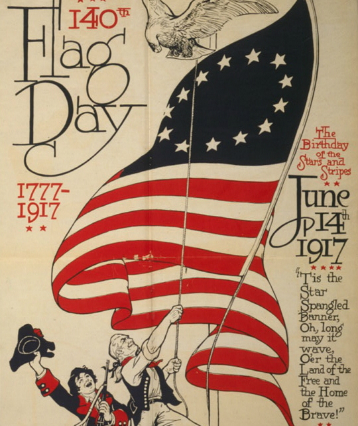