The High Place of Labor

In this speech, delivered to a delegation of labor leaders on September 1, 1924, President Calvin Coolidge (1872–1933) emphasizes the esteem Americans have for hard work and the dignity of honest labor. Coolidge was not commonly regarded as a friend of labor. While governor of Massachusetts in 1919, he had earned national attention for using the National Guard to break up a strike by the Boston police; and in a letter to Samuel Gompers, he justified his action thus: “There is no right to strike against the public safety by anybody, anywhere, anytime.” Yet in this speech as president, he celebrates both the American worker and the nation’s entrepreneurial spirit, and encourages American workers to become “independent masters of their own destiny.”

Why does President Coolidge regard Labor Day as “a peculiarly American holiday”? What does it celebrate? What is the connection between work and what Coolidge calls our nation’s “main problem, the character of the men and women it [America] shall produce”? What does he regard as the proper goals and policies of government with respect to the well-being of the American worker? Do you agree?

Labor Day is more entitled than any other to be called a national holiday. Other holidays had their origin in state legislative action. Labor Day had its origin in national legislative action. After Congress had taken the lead the states followed. It is moreover a peculiarly American holiday. It is a most characteristic representation of our ideals. No other country, I am told, makes a like observance. But in America this high tribute is paid in recognition of the worth and dignity of the men and women who toil.

To my mind America has but one main problem, the character of the men and women it shall produce. It is not fundamentally a Government problem, although the Government can be of a great influence in its solution. It is the real problem of the people themselves. They control its property, they have determined its government, they manage its business. In all things they are the masters of their own destiny. What they are, their intelligence, their fidelity, their courage, their faith, will determine our material prosperity, our successes and happiness at home, and our place in the world abroad.

If anything is to be done then, by the Government, for the people who toil, for the cause of labor, which is the sum of all other causes, it will be by continuing its efforts to provide healthful surroundings, education, reasonable conditions of employment, fair wages for fair work, stable business prosperity, and the encouragement of religious worship. This is the general American policy which is working out with a success more complete for humanity, with its finite limitations, than was ever accomplished anywhere else in the world. The door of opportunity swings wide open in our country. Through it, in constant flow, go those who toil. America recognizes no aristocracy save those who work. The badge of service is the sole requirement for admission to the ranks of our nobility.

It is only necessary to look about you to observe the practical effect of this policy. It is somewhat difficult to find men in important Government positions who did not in their beginnings live by the work of their hands. Of those who sit at the Cabinet table of the Nation none were born to the purple, save only as they were born to become American citizens, and nearly all in early life earned their living by actual manual labor. . . .

But the Government of the United States is not for the gratification of the people who happen to hold office. It is established to promote the general welfare of all the people. That is the American ideal. No matter how many officeholders there may be, or what their origin, our institutions are a failure unless they serve all the citizens in their own homes. It is always necessary to find out what effect the institutions of Government and society have on the wage earner, in order to judge of the desirability of their continuation. One of the outstanding features of the present day, is that American wage earners are living better than at any other time in our history. They have not only retained, but actually increased, the gains they made during the war [World War I]. The cost of living has been high, but the increase in wages has been greater. Compilations of the Department of Labor demonstrate that the wages of an hour, or a day, buy more now than it ever did before. Not only are the American wage earners now receiving more money, and more of the things that money will buy, for their work, than any other wage earners in the world, but more than was ever before received by any community of wage earners. We have here in the United States not only the best paid workers in the world, but the best paid workers that ever lived in this world . . . .

These are some of the material results of present American policies. We have enacted many laws to protect the health of those who are employed in the industries. Especial efforts have been made in this direction in behalf of women and children. We are attempting at the present time to secure a constitutional amendment giving Congress jurisdiction over child labor. The efforts of the states and Nation to provide and encourage education have been such that it is fair to claim that any youth, no matter how humble his circumstances, can unaided secure a college education by the exercise of his own efforts. We have achieved an equality of opportunity which has opened up the avenues of a more abundant life to all the people.

There are two sides to every bargain. It is not only human nature, but necessary to progress, that each side should desire to secure a good trade. This is the case in contracts for employment. In order to give wage earners reasonable advantages, their right has been established to organize, to bargain collectively, and to negotiate through their own chosen agents. The principle also of voluntary arbitration has come to exist almost as a right. Compulsory arbitration has sometimes been proposed, but to my mind it cannot be reconciled with the right of individual freedom. Along with the right to organize goes the right to strike, which is recognized in all private employment. The establishment of all these principles has no doubt been productive of industrial peace, which we are at the present time enjoying to a most unusual degree. This has been brought about by the general recognition that on the whole labor leaders are square, and on the whole employers intend to be fair. When this is the case, mutual conference is the best method of adjusting differences in private industry. Of course employment affecting public safety or public necessity is not private employment, and requires somewhat different treatment. In this field we have been making an interesting experiment in relation to railroad labor.1 This has no doubt been a step in advance. It could probably be modified, through mutual agreement, to the benefit of all concerned.

As a result of all these fortunate circumstances, organized labor is fast becoming one of the powers of capital in this country. Its cooperative enterprises and its entrance into the field of banking and investment have given it not only a new power of influence, but a new point of view. It is learning the problems of enterprise and management by actual experience. This again is the working out of the American ideal in industry. It is the beginning of a more complete economic equality among all the people. I believe it to be the beginning of an era of better understanding, more sympathy, and more fellowship, among those who serve the common welfare through investment and management, and those who serve as wage earners. We have yet a long way to go, but progress has begun and the way lies open to a more complete understanding that will mark the end of industrial strife . . . .

These are some of the policies which I believe we should support, in order that our country may not fail in the character of the men and women which it produces. I want to see our institutions more and more humane. But I do not want to see any of the people cringing suppliants for the favor of the Government, when they should all be independent masters of their own destiny. I want to encourage business, that it may provide profitable employment. I want to see jobs hunting for men, rather than men hunting for jobs. I want the factory able to consume at a fair price the products of the farm. I want every individual, no matter how humble, to know that over him is the protection of public law. I want to raise the economic condition and increase the moral and spiritual well-being of our country. The foundation for a new era is being steadily and surely laid. Whether we shall enter upon it, depends upon the attitude of our fellow countrymen. I have an abiding faith in the American people.

1 In 1924, President Coolidge urged railroad companies and unions to work together to reduce the threat of shutdowns due to striking workers. The result was the Railway Labor Act of 1926, which sought to use arbitration and mediation to settle disputes. Return to text. 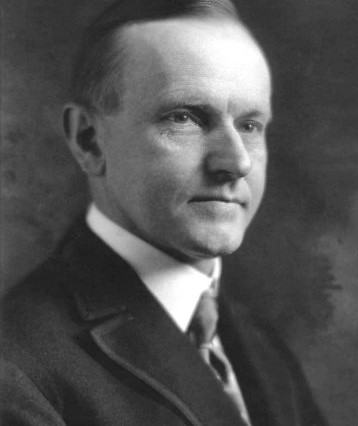