Little is known about the life of Massachusetts-born Charles W. Harwood (1871–95), but his children’s poem about the flag was once widely anthologized. It appeared in 1894 in The Youth’s Companion, a Boston-published magazine for children that existed for over 100 years (1827–1929). In 1892, the magazine published the first copy of the Pledge of Allegiance, written by staff member Francis Bellamy (see below). Harwood’s poem especially addresses children living in the post-Civil War period.

What is a “color guard,” and what is its function? Who, finally, must guard the colors, and why does it matter? What does Harwood mean by saying of the flag, “Children, it is yours to love!”? What does it mean to regard it “as the gift from God above”? What responsibility do you think children, then and now, have toward the flag? How might teachers nurture that responsibility?

There were waving hands and banners, as the crowded car rolled by,
There were shouts from merry children ringing to the summer sky;
Then a strain of music rose and swelled and pealed along the street,
As their gay, tumultuous clamor melted in a chorus sweet:

O say, can you see, by the dawn’s early light,
What so proudly we hailed at the twilight’s last gleaming?
Whose broad stripes and bright stars, through the perilous fight,
O’er the ramparts we watched were so gallantly streaming!

Ah, the starry flag is glorious, and the children love it, too;
And the land is safe and happy where the children’s hearts are true.
How their youthful ardor thrilled me, as the revelation came
That the Guard is ever changing, but the flag remains the same.

We were born too late for glory, but we still in memory keep
Stirring echoes from the battlefields where warrior fathers sleep,
We have held the flag as ours, but, lo! the years are passing by,
And a newer generation waves the Stars and Stripes on high.

Better thus! for now the rancors of the strife no more appal;
And the children know no faction, and the flag belongs to all.
Be it so! We yield the prestige, for the New Guard comes apace,
With the strength of youthful millions, loyal purpose in its face.

Flag of peace or flag of battle! Children, it is yours to love!
Will you honor and defend it, as the gift of God above?
Ah! the children’s hearts are loyal! From a myriad array
North and South there comes the answer, as it came that summer day:

Then conquer we must, when our cause it is just,
And this be our motto, “In God is our trust.”
And the star-spangled banner in triumph shall wave
O’er the land of the free and the home of the brave. 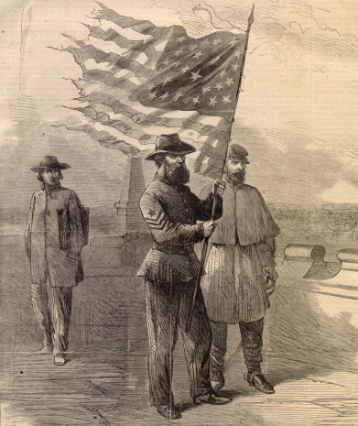