The Ballad of John Henry

On August 28, 1830, the driver of a horse-drawn carriage challenged the Tom Thumb, the first American-built steam locomotive, to a race on the newly formed Baltimore and Ohio Railroad. The locomotive was winning the race until a mechanical malfunction caused it to slow, allowing the horse-drawn car to pull ahead. Despite this initial setback, steam locomotives quickly became popular with railroad companies, and for the next 40 years, thousands of miles of railroad track would be laid across the country. Like the carriage driver who challenged the Tom Thumb, the folk hero John Henry, an ex-slave African American steel driver, was said to have challenged a mechanical, steam-powered drill to a steel-driving race in order to protect his job. John Henry won the competition, only to die in victory.

The song celebrates a man who matched his prowess against that of a machine. Do we admire him for doing so? The song begins with John Henry’s premonition, while still a baby, that “Hammer’s gonna be the death of me.” Yet as a grown man he clings to that hammer and squarely faces the death that doing so brings him. Why? What, for John Henry, does that have to do with the dignity of “being a man”? Do you admire him for dying with his hammer in his hand? Can we generalize, to other ways of living and working, the meaning of dying with one’s hammer in one’s hand?

For a musical rendition of this ballad, see Harry Belafonte’s performance in 1959 at Carnegie Hall, available here.

1 The hammer man always had a partner, known as a shaker or turner, who would crouch close to the hole and rotate the drill after each blow. Return to text. 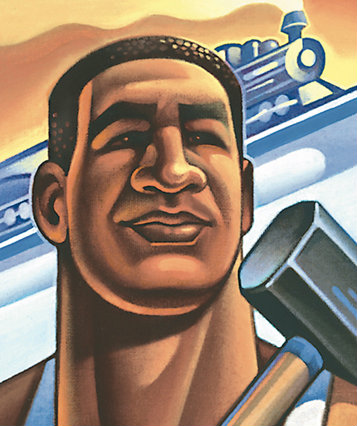