The pursuit of a more perfect Union, with liberty and justice for all its citizens, remains unfinished business. Despite the abolition of slavery after the Civil War, black Americans were systematically denied their civil rights, especially, but not only, in the South, under conditions of racial segregation and discrimination. At the center of the ultimately successful Civil Rights Movement of the 1950s and 1960s was the charismatic Baptist minister, Dr. Martin Luther King Jr. (1929–68), whose courageous and inspiring leadership our nation has memorialized by a national holiday in honor of his birthday and a monument on the National Mall. The present selection is taken from a sermon King gave at his Ebenezer Baptist Church in Atlanta on July 4, 1965, almost two years after he led the March on Washington, which galvanized support for ending legal segregation and passing the Civil Rights Act in 1964. In the sermon, King speaks at length about the Declaration of Independence, whose said-to-be self-evident truths he calls the American dream.

What is the difference between calling human equality or unalienable rights “self-evident truths” and calling them “a [great] dream”? What connection does King make between the Declaration’s idea of human equality and the biblical teachings of love and brotherhood? In the Declaration, the failure of government to secure our natural or God-given rights becomes the basis for (rightful) revolution and the establishment of a new political order. Why does King not follow the Declaration’s conclusion, but instead summons blacks to work “within the system,” to practice nonviolence, and to love their tormentors? Is he right in treating poverty as a violation of the Declaration’s American “dream”? Is King right in suggesting that the dignity of work is not marked by the income that it brings? What does King mean by saying, “God somehow called America to do a special job for mankind and the world”?  King looks forward to a day when “we will become one big family of Americans,” not “hyphenated-Americans” but “just Americans”? Are we making progress toward that day? Is it, for you, an attractive dream?

I planned to use for the textual basis for our thinking together that passage from the prologue of the book of Job where Satan is pictured as asking God, “Does Job serve thee for nought?” And I’d like to ask you to allow me to hold that sermon in abeyance and preach it the next time I am in the pulpit in order to share with you some other ideas. This morning I was riding to the airport in Washington, DC, and on the way to the airport the limousine passed by the Jefferson monument, and Reverend Andrew Young, my executive assistant, said to me, “It’s quite coincidental that we would be passing by the Jefferson Monument on Independence Day.” You can get so busy in life that you forget holidays and other days, and it had slipped my mind altogether that today was the Fourth of July. And I said to him, “It is coincidental and quite significant, and I think when I get to Atlanta and go to my pulpit, I will try to preach a sermon in the spirit of the founding fathers of our nation and in the spirit of the Declaration of Independence.” And so this morning I would like to use as a subject from which to preach: “The American Dream.” 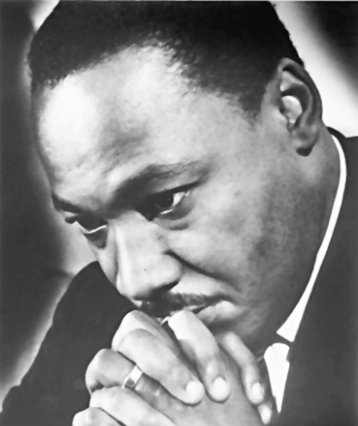