This famous poem grew out of World War I, with its unprecedented magnitude and scale of loss. Fallen soldiers by the tens of thousands were, and remain, buried in graves and fields far from home. Also, the ideological character of the battle raised new questions about how to properly honor the dead. John McCrae (1872–1918), a Canadian physician, poet, and soldier serving with the Allied Powers in Belgium, was called upon to perform burial rites for a close friend who was killed at the battle of Ypres. The next day, May 3, 1915, McCrae, deeply moved by the sight of poppies growing around the graves of fallen soldiers, composed this poem while riding in the back of an ambulance. It is written from the perspective of the dead. McCrae himself died during the war of pneumonia, contracted while commanding a Canadian military hospital that he had set up in Boulogne (northern France). He was buried nearby with full military honors.

What is the mood and tone of the poem, and how does it change as the poem progresses? Can you picture the scene, as given by the first stanza? How are you moved by the declaration of the Dead in the second stanza? What is it that the dead want from the living? What, then, is the primary duty that the living owe to the honored dead? If we fail to continue their “quarrel with the foe” or drop “the torch,” are we today betraying our military men and women who have died in our recent wars? How long can—and should—we be obliged to “keep faith” with the cause for which our soldiers die?

In Flanders fields the poppies blow
Between the crosses, row on row,
That mark our place; and in the sky
The larks, still bravely singing, fly
Scarce heard amid the guns below.

We are the Dead. Short days ago
We lived, felt dawn, saw sunset glow,
Loved and were loved, and now we lie
In Flanders fields.

Take up our quarrel with the foe:
To you from failing hands we throw
The torch; be yours to hold it high.
If ye break faith with us who die
We shall not sleep, though poppies grow
In Flanders fields. 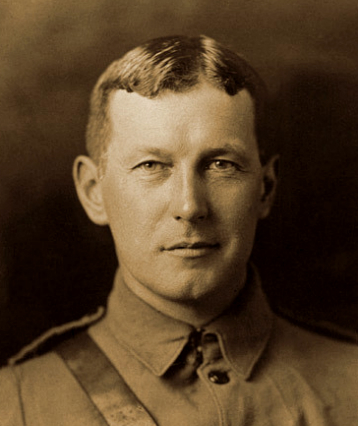