Rembrandt Peale (1778–1860), son of famous artist and museum owner Charles Willson Peale, was born on February 22, 1788 in Bucksville, Pennsylvania. Developing an interest in art at a young age, he completed his first painting, a self-portrait, at the age of 13.

As a young artist, Peale studied the work of contemporary painters such as Gilbert Stuart and Robert Edge Pine, as well as paintings by European artists. Because of his father’s connections in the art world, Peale had the opportunity to work in most of the major cities along the eastern coast of the United States, including Philadelphia, Boston, New York, Baltimore, Washington, and Charleston.

In 1795, when Peale was 17 years old, his father arranged for him to paint a portrait of President George Washington, then in the final years of his second term as president. Washington, known for his aversion to sitting for portraits, agreed to sit for three sessions of three hours each at Peale’s father’s museum in Philadelphia. Nervous about painting the president by himself, Peale talked his father into sketching a portrait of Washington at the same time. At the second session, he was even joined by his uncle and two of his brothers, causing Gilbert Stuart to joke with Martha Washington in the next room that “the general’s in a perilous situation . . . there are five painters at him, and you who know how much he has suffered when only attended by one, can judge of the horrors of his situation.”* Although this 1795 portrait was the only one that he painted from a posing Washington, Peale drew from the original painting for years to come, producing roughly 80 portraits of Washington during the course of his career.

While in London from 1802–03, Peale studied at the Royal Academy and with the American expatriate painter Benjamin West. For much of 1808–10 he lived in France, painting portraits for his father’s collection, and from 1828–30 he lived in Italy, copying master paintings for collectors in the United States. As a result of his time in Europe, Peale began to incorporate elements of French neoclassicism into his work, which can be seen in some of his later portraits of Washington. (See, for example, Peale’s Patriae Pater, painted in 1824, that shows Washington as the “Father of Our Country,” surrounded by a painted stone window decorated with oak leaves—a symbol of virtue and endurance—and a faux engraving of the Roman god Jupiter.

This portrait of George Washington was completed in the late 1850s, when Peale was nearly 80 years old. In full form, it shows Washington framed by a painted stone oval (or “porthole,” as it came to be called) in the style of the European trompe-l’oeil, an art technique in which the painter depicts part of the painting as three-dimensional. The framing, like that in Patriae Pater, is intended to invoke a feeling of antiquity. It also serves to separate viewers from the portrait’s subject: Washington, long having passed into “everlasting remembrance” (as Thomas Jefferson put it), remains firmly behind the frame, looking into the beyond. It is Washington—the man, the idea, the general, and the father of our nation—remembered.

What do each of these elements contribute to the overall impression: the framing, the pose, the light, the color, the dress, the profile, the gaze, the brow, the nose, the chin, and the expression? How well does this portrait capture the man you think you know and have read about in this book?

Return to The Meaning of George Washington’s Birthday. 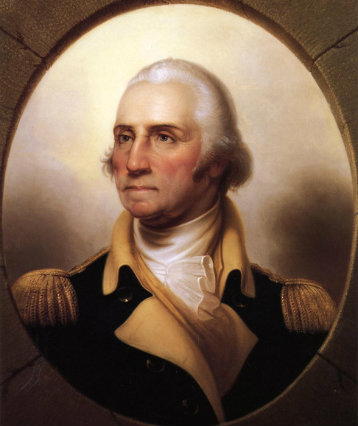