Excerpt from “The First Settlement of New England”

In 1820, the bicentennial of the Pilgrims’ arrival at Plymouth Rock—well before Thanksgiving became a national holiday—the great statesman, orator, and United States Senator Daniel Webster (1782–1852) delivered this oration (excerpted) at the landing site. In this speech, he performs his duty to “our ancestors and our posterity” and to “this memorable spot” by paying homage to our Pilgrim fathers and to the blessings of liberty and equality that Americans enjoy thanks to their legacy. His oration moves from an attempt to articulate for the assembled the “genius of the place” to a discussion of our system of government, and he concludes with a look into the future and a charge to future generations.

Imagine yourself standing where Webster stood, now almost double his “a hundred years hence.” Can you experience the “genius of the place” and appreciate what the Pilgrims accomplished? What, exactly, does Webster praise in our form of government, and how is it connected with the Pilgrims and their New England settlements? What is the connection between the American laws about property and the practices of freedom and equality—and between these and the slave trade? For what would Webster have us be thankful today, and how should we express our gratitude?

Standing in relation to our ancestors and our posterity, we are assembled on this memorable spot, to perform the duties which that relation and the present occasion impose upon us. We have come to this Rock, to record here our homage for our Pilgrim Fathers; our sympathy in their sufferings; our gratitude for their labors; our admiration of their virtues; our veneration for their piety; and our attachment to those principles of civil and religious liberty, which they encountered the dangers of the ocean, the storms of heaven, the violence of savages, disease, exile, and famine, to enjoy and to establish. And we would leave here, also, for the generations which are rising up rapidly to fill our places, some proof that we have endeavored to transmit the great inheritance unimpaired; that in our estimate of public principles and private virtue, in our veneration of religion and piety, in our devotion to civil and religious liberty, in our regard for whatever advances human knowledge or improves human happiness, we are not altogether unworthy of our origin.

There is a local feeling connected with this occasion, too strong to be resisted; a sort of genius of the place, which inspires and awes us. We feel that we are on the spot where the first scene of our history was laid; where the hearths and altars of New England were first placed; where Christianity, and civilization, and letters made their first lodgement, in a vast extent of country, covered with a wilderness, and peopled by roving barbarians. We are here, at the season of the year at which the event took place. The imagination irresistibly and rapidly draws around us the principal features and the leading characters in the original scene. We cast our eyes abroad on the ocean, and we see where the little barque, with the interesting group upon its deck, made its slow progress to the shore. We look around us, and behold the hills and promontories where the anxious eyes of our fathers first saw the places of habitation and of rest. We feel the cold which benumbed, and listen to the winds which pierced them. Beneath us is the Rock, on which New England received the feet of the Pilgrims. We seem even to behold them, as they struggle with the elements, and, with toilsome efforts, gain the shore. We listen to the chiefs in council; we see the unexampled exhibition of female fortitude and resignation; we hear the whisperings of youthful impatience, and we see, what a painter of our own has also represented by his pencil, chilled and shivering childhood, houseless, but for a mother’s arms, couchless, but for a mother’s breast, till our own blood almost freezes. The mild dignity of CARVER and of BRADFORD; the decisive and soldierlike air and manner of STANDISH; the devout BREWSTER; the enterprising ALLERTON; the general firmness and thoughtfulness of the whole band; their conscious joy for dangers escaped; their deep solicitude about danger to come; their trust in Heaven; their high religious faith, full of confidence and anticipation; all of these seem to belong to this place, and to be present upon this occasion, to fill us with reverence and admiration . . .

The nature and constitution of society and government in this country are interesting topics, to which I would devote what remains of the time allowed to this occasion. Of our system of government the first thing to be said is, that it is really and practically a free system. It originates entirely with the people and rests on no other foundation than their assent. To judge of its actual operation, it is not enough to look merely at the form of its construction. The practical character of government depends often on a variety of considerations, besides the abstract frame of its constitutional organization. Among these are the condition and tenure of property; the laws regulating its alienation and descent; the presence or absence of a military power; an armed or unarmed yeomanry; the spirit of the age, and the degree of general intelligence. In these respects it cannot be denied that the circumstances of this country are most favorable to the hope of maintaining a government of a great nation on principles entirely popular. In the absence of military power, the nature of government must essentially depend on the manner in which property is holden and distributed. There is a natural influence belonging to property, whether it exists in many hands or few; and it is on the rights of property that both despotism and unrestrained popular violence ordinarily commence their attacks. Our ancestors began their system of government here under a condition of comparative equality in regard to wealth, and their early laws were of a nature to favor and continue this equality.

A republican form of government rests not more on political constitutions, than on those laws which regulate the descent and transmission of property. Governments like ours could not have been maintained, where property was holden according to the principles of the feudal system; nor, on the other hand, could the feudal constitution possibly exist with us. Our New England ancestors brought hither no great capitals from Europe; and if they had, there was nothing productive in which they could have been invested. They left behind them the whole feudal policy of the other continent. They broke away at once from the system of military service established in the Dark Ages, and which continues, down even to the present time, more or less to affect the condition of property all over Europe. They came to a new country. There were, as yet, no lands yielding rent, and no tenants rendering service. The whole soil was unreclaimed from barbarism. They were themselves, either from their original condition, or from the necessity of their common interest, nearly on a general level in respect to property. Their situation demanded a parcelling out and division of the lands, and it may be fairly said, that this necessary act fixed the future frame and form of their government. The character of their political institutions was determined by the fundamental laws respecting property. The laws rendered estates divisible among sons and daughters. The right of primogeniture, at first limited and curtailed, was afterwards abolished. The property was all freehold. The entailment of estates, long trusts, and the other processes for fettering and tying up inheritances, were not applicable to the condition of society, and seldom made use of . . . .

I deem it my duty on this occasion to suggest, that the land is not yet wholly free from the contamination of a traffic, at which every feeling of humanity must forever revolt,—I mean the African slave trade. Neither public sentiment, nor the law, has hitherto been able entirely to put an end to this odious and abominable trade. At the moment when God in his mercy has blessed the Christian world with a universal peace, there is reason to fear, that, to the disgrace of the Christian name and character, new efforts are making for the extension of this trade by subjects and citizens of Christian states, in whose hearts there dwell no sentiments of humanity or of justice, and over whom neither the fear of God nor the fear of man exercises a control. In the sight of our law, the African slave trader is a pirate and a felon; and in the sight of Heaven, an offender beyond the ordinary depth of human guilt. There is no brighter page of our history, than that which records the measures which have been adopted by the government at an early day, and at different times since, for the suppression of this traffic; and I would call on all the true sons of New England to cooperate with the laws of man, and the justice of Heaven. If there be, within the extent of our knowledge or influence, any participation in this traffic, let us pledge ourselves here, upon the rock of Plymouth, to extirpate and destroy it. It is not fit that the land of the Pilgrims should bear the shame longer. I hear the sound of the hammer, I see the smoke of the furnaces where manacles and fetters are still forged for human limbs. I see the visages of those who by stealth and at midnight labor in this work of hell, foul and dark, as may become the artificers of such instruments of misery and torture. Let that spot be purified, or let it cease to be of New England. Let it be purified, or let it be set aside from the Christian world; let it be put out of the circle of human sympathies and human regards, and let civilized man henceforth have no communion with it . . .

The hours of this day are rapidly flying, and this occasion will soon be passed. Neither we nor our children can be expected to behold its return. They are in the distant regions of futurity, they exist only in the all-creating power of God, who shall stand here a hundred years hence, to trace, through us, their descent from the Pilgrims and to survey, as we have now surveyed, the progress of their country, during the lapse of a century. We would anticipate their concurrence with us in our sentiments of deep regard for our common ancestors. We would anticipate and partake the pleasure with which they will then recount the steps of New England’s advancement. On the morning of that day, although it will not disturb us in our repose, the voice of acclamation and gratitude, commencing on the Rock of Plymouth, shall be transmitted through millions of the sons of the Pilgrims, till it lose itself in the murmurs of the Pacific seas.

We would leave for consideration of those who shall then occupy our places, some proof that we hold the blessings transmitted from our fathers in just estimation; some proof of our attachment to the cause of good government, and of civil and religious liberty; some proof of a sincere and ardent desire to promote every thing which may enlarge the understandings and improve the hearts of men. And when, from the long distance of a hundred years, they shall look back upon us, they shall know, at least, that we possessed affections, which, running backward and warming with gratitude for what our ancestors have done for our happiness, run forward also to our posterity, and meet them with cordial salutation, ere yet they have arrived on the shore of Being. 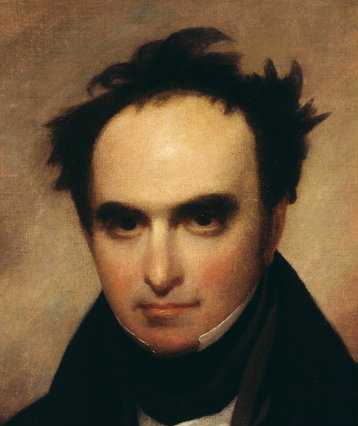